Moments in Music: the Lost Art of Music Manifestos

A manifesto is a statement of your artistic vision. It spells out what you stand for politically, what you want to change in the world through your art.

There was a time when bands made as many manifestos as they made records.

Music isn’t just about how to write a song, it’s about making a cultural impact. Manifestos have the power to spark whole movements, provoke social change, and cause aesthetic revolutions that change our vision of art, music and beyond.

Some predicted the future, all of them broke away from the past.

While music manifestos may seem like a lost art, they’re a powerful tool in need of a HUGE revival. They make your musical message all that more powerful and long lasting.

Here are 8 trailblazing manifestos made by musicians that will inspire you to write your own:

Ferruccio Busoni, Sketch of a New Aesthetic of Music (1907) 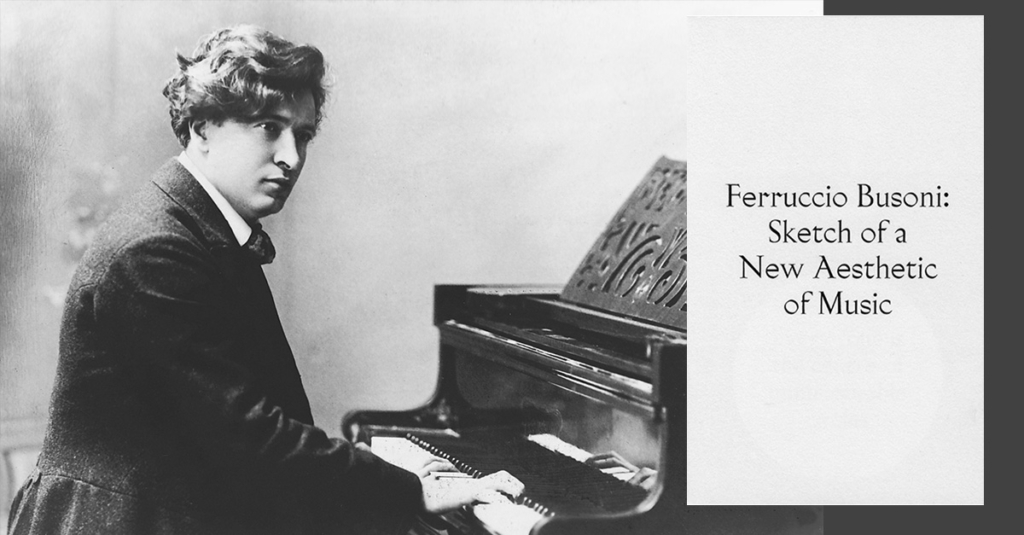 What’s astonishing about this text is how early it was written: 1907. It pre-dates the more famous music innovators like Arnold Schoenberg, Edgard Varèse, John Cage and Karlheinz Stockhausen.

During Busoni’s time, many people thought that music composition was in sharp decline. They lamented that the greatest music ever made was of the past – think Bach, Mozart and Beethoven.

We all know today that it’s not true – this bummed out attitude usually comes from fear and close-mindedness. Busoni’s manifesto had a fresher perspective: he wrote that the best of music was still to come – and that music would continue to get better for several thousand years. (I couldn’t agree more)

In highly metaphorical and romantic language, Sketch of a New Aesthetic of Music describes music as a child that still hasn’t matured enough to become “free”.

Unlike many of his contemporaries, Busoni was excited about technology and what it would bring to music. In his manifesto, he mentions early prototypes by Thaddeus Cahill – who created the first notable electronic instrument the Telharmonium. 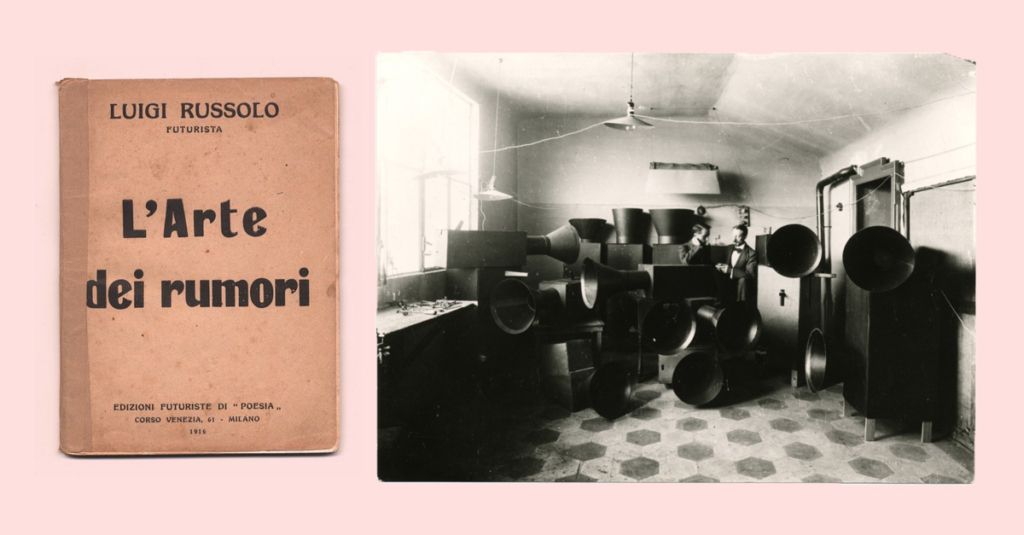 Writing in 1913, Russolo believed that people were starting to become familiar with the new sounds of urbanization and factory work: mechanical, fast, and rhythmic noises.

For Russolo, these noises were much more interesting and musical than the ‘boring’ sounds of traditional orchestral music. He encouraged people to listen for noises in their environment and think of them as music.

Art of Noises also predicted the use of synthesizers to create completely new sounds. Rusolo writes: “as soon as we will have found the mechanical principle which produces a certain noise, we will be able to graduate its pitch according to the laws of acoustics.” That’s in 1913!

Even though the Futurists were known for their love of war, violence and radical right-wing nationalism, Art of Noises remains a fascinating early document. It spelled out ideas that would re-emerge many decades later in experimental, punk and noise music. 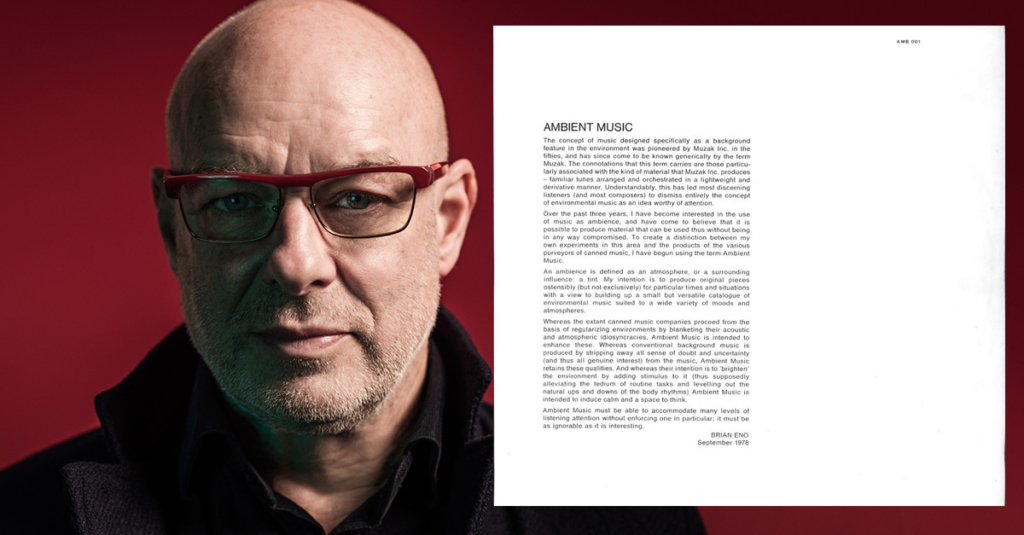 This short manifesto was published in the liner notes of the seminal album Ambient 1: Music for Airports. In it Brian Eno defines what ‘ambient music’ means for him – a definition that came to be synonymous with the genre.

Brian Eno is a British musician and visual artist. He’s among the most celebrated and active musicians in the ambient genre.

In his manifesto, he describes how ambient music – as opposed to ‘muzak’ or background music – keeps the feeling of “doubt” and “uncertainty.” It induces calm and creates “space to think.”

Eno adds: “Ambient Music must be able to accommodate many levels of listening attention without enforcing one in particular; it must be as ignorable as it is interesting.” 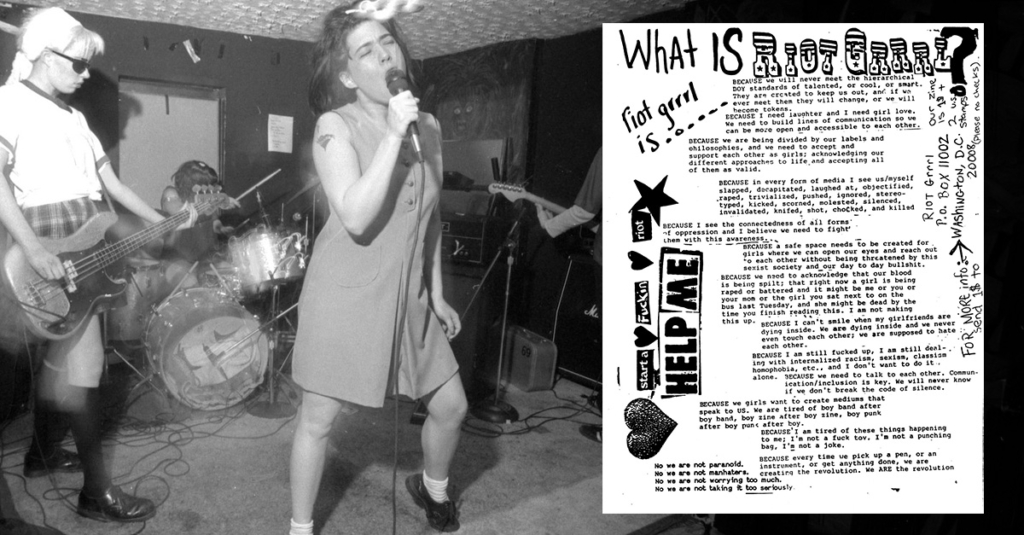 Riot Grrrl is a feminist punk movement from the 90s that originated in Olympia (Washington, United States), spearheaded by band such as Bikini Kill, Sleater-Kinney, Bratmobile and many more.

It was an important cultural and political moment in music. It made visible the misogyny rampant in the indie rock and punk scenes. Riot grrrls made music, but also did social justice activism, organized political rallies and made DIY zines.

The zines they produced were perhaps as important as the music was – if not more. They immortalized their philosophy, allowing for the movement to spread to a national audience.

What is Riot Grrrl? appeared in Bikini Kill’s zine from 1991 and epitomized what the movement stood for: 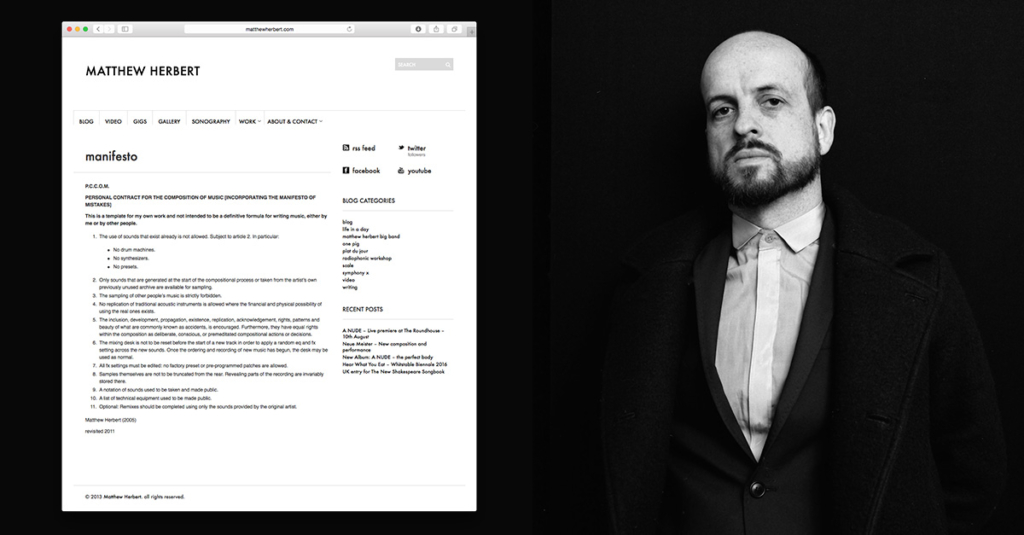 P.C.C.O.M is short for Personal Contract for the Composition Of Music [Incorporating the Manifesto of Mistakes]. Less a manifesto and more a personal guide for making music, Herbert warns that it’s “not intended to be a definitive formula for writing music, either by me or by other people”.

Matthew Herbert is an electronic producer known for recording everyday sounds and chopping them up to make tracks. Unsurprisingly his manifesto focuses on sampling and mistakes.

To him, presets and sampling other people’s music (or even any pre-recorded sounds) is unacceptable. Mistakes on the other hand, are highly valued. They’re as important as deliberate decisions, and should be given equal attention.

This ‘personal contract’ will surprise some of you, even make you angry. But the takeaway here is that sometimes creating boundaries and rules for yourself will spark more creativity. Having infinite options isn’t always the best. 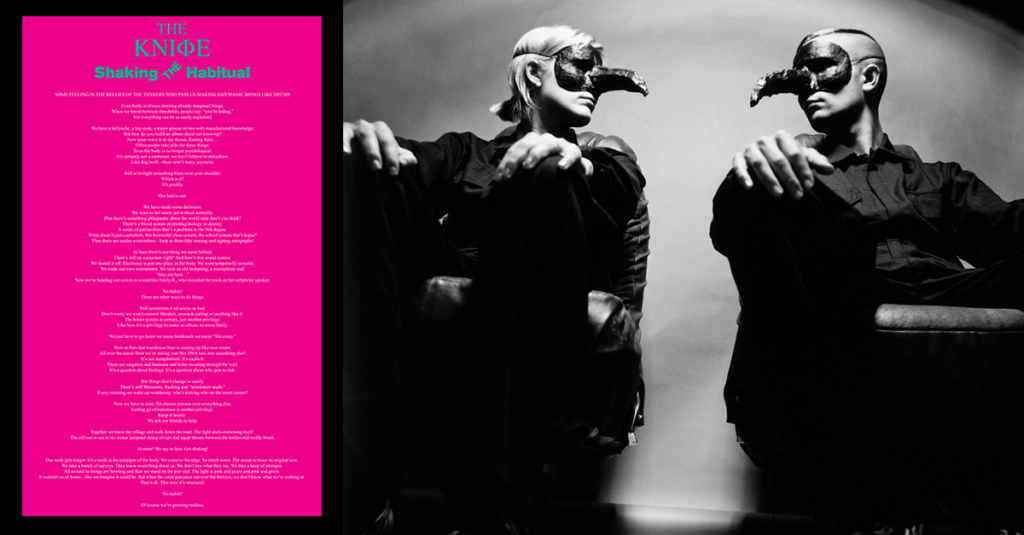 Shaking the Habitual is the fourth studio album by the Swedish electronic duo The Knife. They are known for their experimental take on pop electronica, the Venetian masks they wear for performing and their anti-conformism.

As the title suggests, Shaking the Habitual is a call to shake up the status quo. The album came with comics calling for the end of extreme wealth as well as a manifesto.

The manifesto is a long poetic letter, at times quite hard to decipher. But it is filled with nuggets of wisdom:

The Knife demonstrate how an album can take many shapes aside from the music, including poetry and comics. 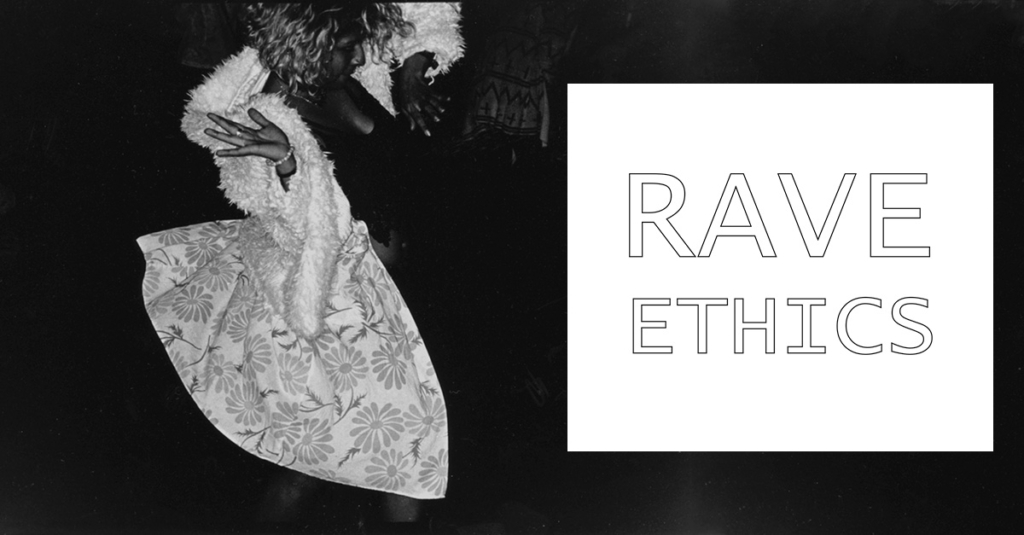 Rave Ethics isn’t technically a manifesto – it’s a zine. I’ve included it because it offers an answer to the crucial question: how can we educate people in order to make club/rave spaces safer and more fun?

Because raves are not only parties where people go to lose their minds and get messed up.

As Catherine Hilgers (the creator of Rave Ethics) says: “Raves … can also be community, culture, home, family, and an introduction to alternative or anti-capitalist lifestyles. They can be instruments of tangible social change!”

But many parties and concerts are unsafe – especially for marginalized groups (women, people of color, trans folks…).

Rave Ethics seeks to educate clubgoers and ravers about creating an atmosphere of respect, wellness and fun. It’s a practical guide on safer behaviours on the dancefloor, from physical safety, to drug use, and consensual flirting. These concepts apply to any concert or event.

Contributors include many female-identified DJs, artists and party promoters from around the world. 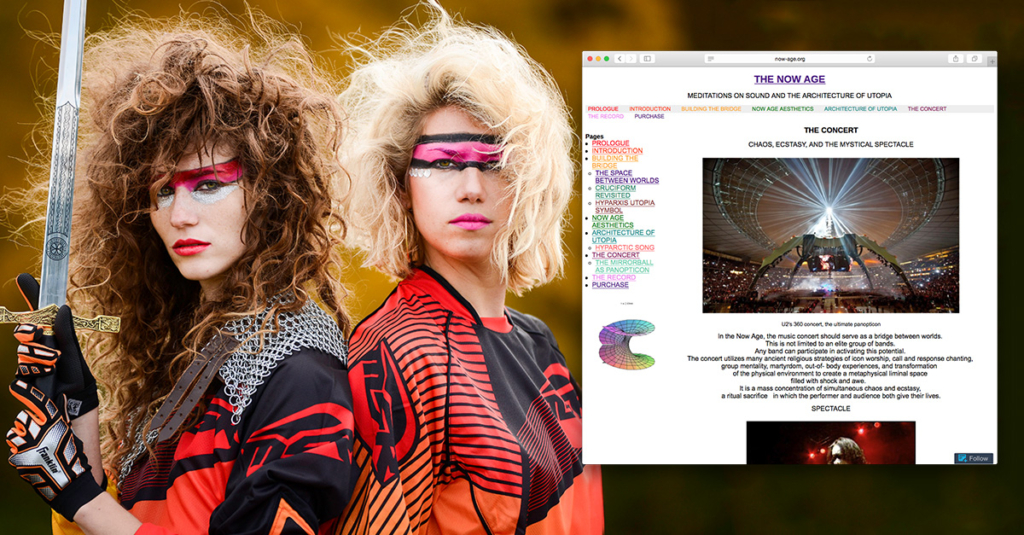 Prince Rama is a New Age psych-dance project from Brooklyn formed by the Larson sisters – Taraka and Nimai. In their manifesto, they define their entire philosophy, laying down their guiding aesthetics and their own definition of reality, music, and sound.

The Now Age offers a spiritual take on concerts, discoballs, and records that will you get you thinking about those things in a new way.

For Prince Rama, writing a manifesto is an integral part of making music. Some parts of the creative process go into the music, others into writing or visuals:

As Taraka told me over email: “Manifestos for me are also a way to collect all the stray ideas, philosophies, and images. […] I don’t really look at it as separate from the music at all, as it was all stewing in the same primordial soup at the time the album was written – only some bits of the soup went on to become more musical and others more philosophical and visual.”

Prince Rama are currently writing another manifesto. It will come out in September 2016 for the PS1 Art Book Fair… keep your eyes peeled!

Your Manifesto Here and Now!

Manifestos can come in all kinds of forms: online books, zines, liner notes, even t-shirts. They hold the power of artists’ ideas – and the power to spread them.

Fashion Designer and punk personality Vivienne Westwood wrote in a manifesto of her own: “We have the choice to become more cultivated and therefore more human.”

Manifestos are a step in that direction.

Your music and your ideas go hand in hand. So make your liner notes count! Write your convictions. Inspire people. Push for social change. It’ll make your creative message loud and clear and your music that much more meaningful.

So go ahead, write a music manifesto!