Creative Strategies: Why Freshness Will Improve Your Music Collaboration

Our work together would go on to chart up at #6 on KCRW’s Morning Becomes Eclectic show in LA and would eventually become my most popular song.

Our work together was completely new, fresh and uninhibited compared to my prior songwriting experiences. The adventurous spirit and freedom in our process was able to deliver an energy that listeners resonated with.

When tired formulas and predictable routines influence the way you make music, creative ideas can get stifled and pushed to the side.

Your songwriting process needs a shake up every once in a while.

Keeping things fresh, vibrant and even risky in your music collaboration process is a great way to unlock musical creativity.

But how do you apply creativity to collaboration the same way you would to a song or beat?

In this article I’ll take you through some ways other bands have shaken up their processes and suggest some useful starting points for keeping your collaboration fresh!

Writing with new partners or injecting some randomness into the songwriting relationships you already rely on might be just what you need to create something truly new and compelling.

There are risks in new or unconventional collaborations. There’s no telling how well two people will work together if you’ve never tried collaborating before.

But if you’re looking to approach music in an entirely new way, adding distance between you and your collaborators or working with a new person entirely, is a great way to freshen up your process—just ask indie pop band The Postal Service. 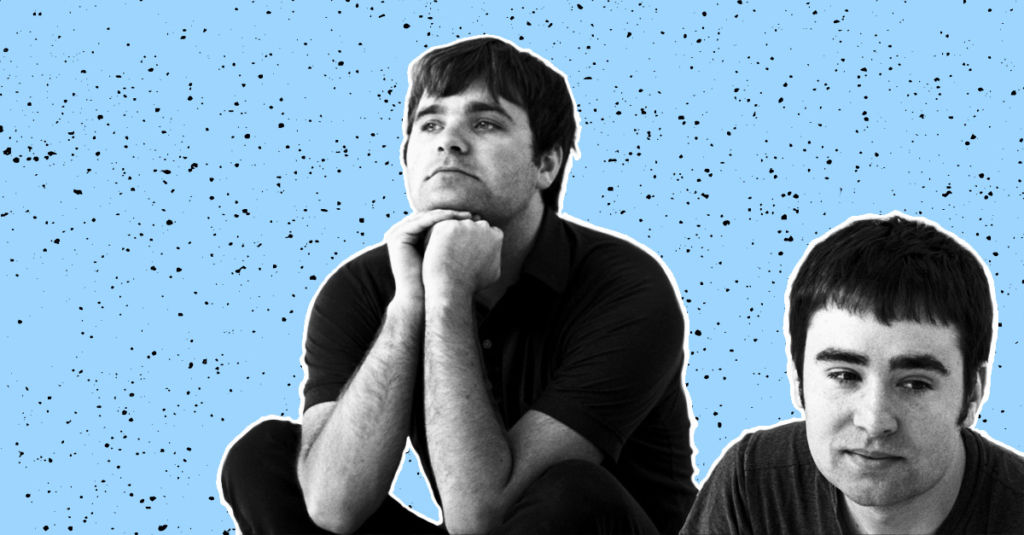 Give Up, The Postal Service’s sole and platinum-selling album, happened almost by accident…

In a recent interview, band members Ben Gibbard (Death Cab For Cutie) and Jimmy Tamborello (Dntel) described the origins of The Postal Service as being almost completely improvised.

The two musicians barely knew each other when Tamborello asked Gibbard to sing on a track he planned to release through his electronic project Dntel.

After sensing some chemistry in the song they’d collaborated on, Gibbard suggested they work on more music together, and the two began working on the music that would later be released as The Postal Service.

Gibbard—Seattle-based singer and principal songwriter of Death Cab For Cutie—crafted lyrics and melodies over tracks that Tamborello would send through the mail from LA.

The unconventional collaboration method let the songwriters write Give Up in a completely different way than they were used to.

Released by Sub Pop, the album went on to become one of alternative music’s most surprising success stories.

To date, Give Up has sold well over a million copies and is acclaimed as an album that helped shape the sound of the early 2000’s… and it was all based on one bold collaborative experiment.

The duo refuses to make more records together because they don’t believe they can replicate the energy and freshness of their original collaborations.

So why did this unique approach work so well for postal service? And what can it tell you about your own process?

Friendships with lots of history have traditionally made for some great songwriting partnerships.

But they can also be destructive to your songwriting if they’re not fresh, healthy and inspired.

One of the factors behind The Postal Service’s remarkable success story is the fact that Gibbard and Tamborello barely knew each other when they began collaborating.

Egos, expectations, competition and habits usually don’t play a big role in new creative relationships, but when seasoned partners sit down to write music together, they often do.

No, not everyone can or should trade in their songwriting partners for complete musical strangers, but all musicians can benefit from approaching music collaboration in new, unpredictable and fresh ways.

The stranger doesn’t have to be your partner, it can be the process itself.

Makes sense right? Fresh experiences make better music. But how do you approach a new collaboration and make the most of it?

How to Keep Your Collaboration Exciting and Inspiring

If things seem stale between you and your writing partner, it’s a good idea to take a fresh look at how you make music.

Ever find yourself mindlessly doing the same things over and over again in your writing process?

Find those things and work to change them. Think of different approaches to your songwriting.

Here’s 15 ways to inject some life into your music collaboration:

It might (and should) feel strange to write music in challenging ways you’re not used to. But that’s the best part about it!

The benefits and freedoms of adding change and risk to your collaboration process is well worth the discomfort.

Purposefully injecting discomfort and unfamiliarity into your writing process might sound like a bad idea, but it’s essential if you’re interested in writing meaningful music over a long period of time. New and fresh collaboration isn’t easy, but then again, nothing in music really is.