The 11 Best Delay Plugins for Every Mix Situation

Delay is a crucial audio effect for creating space while mixing music. Alongside reverb, delay plugins are key tools for crafting the ambience of your songs.

But there are so many different delay plugins out there. Searching for the best one for your session can take you out of your creative flow pretty quick.

Luckily, If you know a bit about the different types of delay and the classic hardware that they’re modelled on, it’s much easier to choose the right one at the right time.

In this article I’ll go through the 4 main types of delay, where to use them in your mix and the best delay plugins for every mix scenario.

How does delay work?

All delay effects are based on the same time-based principle.

The input of a delay effect goes to a recording medium that makes a copy of the signal. That signal is then played back later in time after a variable duration or delay time. 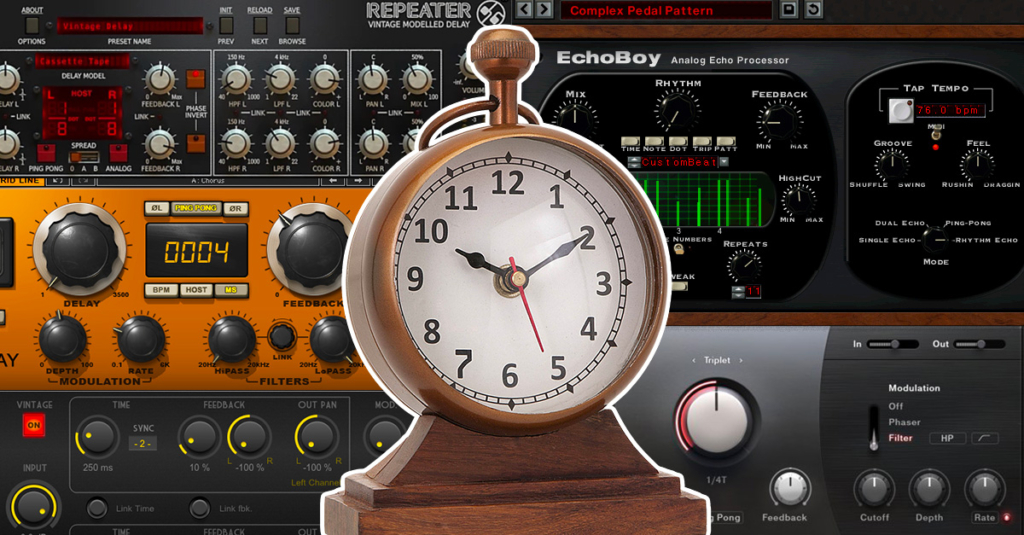 A portion of the delayed signal is routed back to the input (feedback) and the two signals are blended together (wet/dry mix) to create the illusion of cascading echoes.

No matter how complex a modern delay plugin might be, all delay effects are based on this simple concept.

Here are the 4 main delay types:

Engineers realized early on that tape based recording systems could be adapted into echo units.

Delay was originally intended to mimic the natural reflections of acoustic echo. But tape delay effects didn’t exactly get it right.

To save space, the tape passed by the heads in a closed loop instead of spooling on a reel. That left limited delay time available and caused the tape to wear out faster.

The “wow and flutter” or subtle speed fluctuations of the tape caused the delayed signal to have a subtle, natural modulation.

Worn tape and improper biasing added saturation and blurred the repeats together slightly.

What were considered imperfections at the time are highly sought-after today. Engineers jealously covet tape delays for their warm, musical repeats.

Tape delay is perfect wherever you need a warm but detailed delay with subtle modulation.

There’s something magical about the way a great tape delay sits in a mix. Try out hi-fi studio tape models on vocals and grittier, worn tape styles on electric guitar. 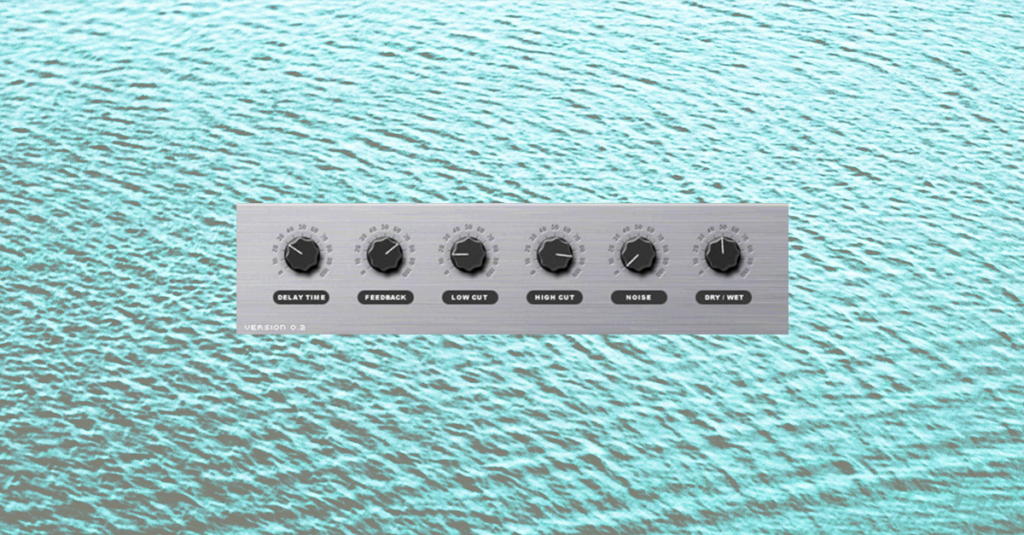 E-phonic Tape Delay is a simple but effective plugin for getting started with the sound of analog tape. 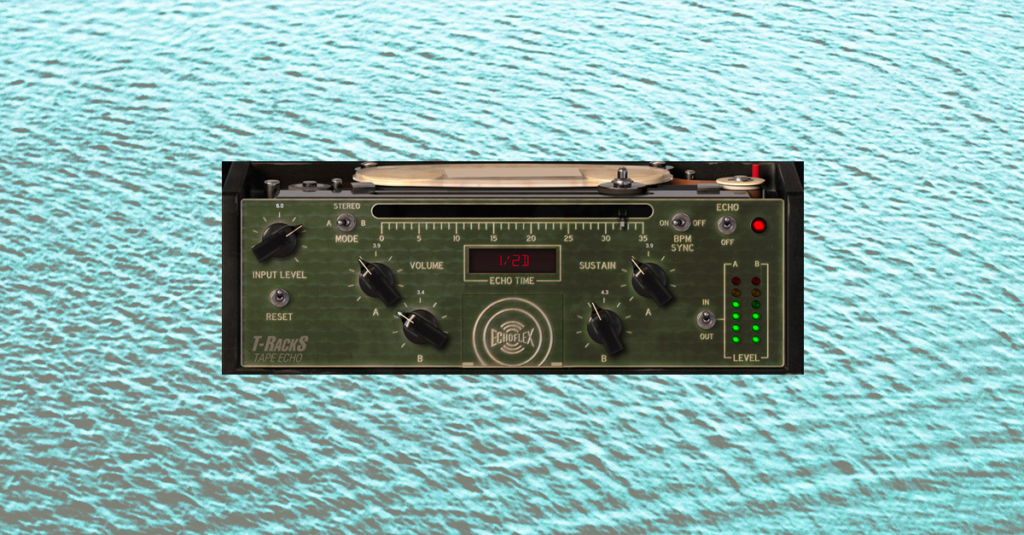 IK Multimedia’s Tape Echo is a quality tape emulation from a respected brand.

It’s a great option If you’re looking for a simple, good-sounding tape echo at an affordable price 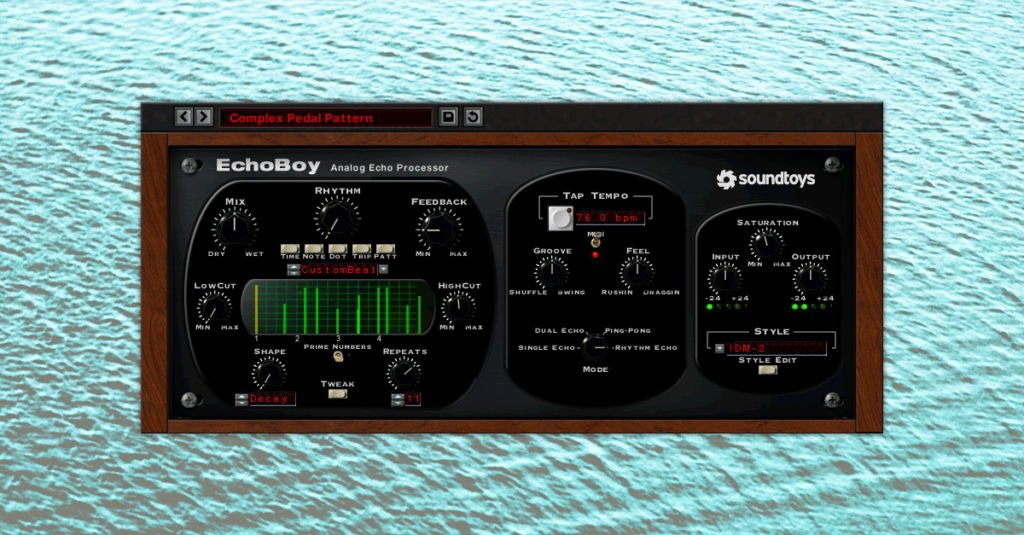 The various tape models are spot on in terms of accuracy and sound—great in any mix.

As analog technology advanced in the mid-seventies, non-tape based delay alternatives began to appear.

Tape delay units sounded good but they were bulky, impractical and required lots of maintenance.

A “bucket brigade device” works exactly how you’d imagine. A voltage is passed along a series of capacitance sections like a line of people dumping water into the bucket of the person next to them.

Just like in the analogy, the process works well enough, but there’s inevitably some loss down the line.

The repeats of an analog delay are already fairly dark and indistinct. But each successive feedback pass further degrades the integrity of the signal until it blurs into feedback.

The dark, murky repeats of analog delays were an instant hit and the much smaller form allowed delay to make it into guitar pedal format. 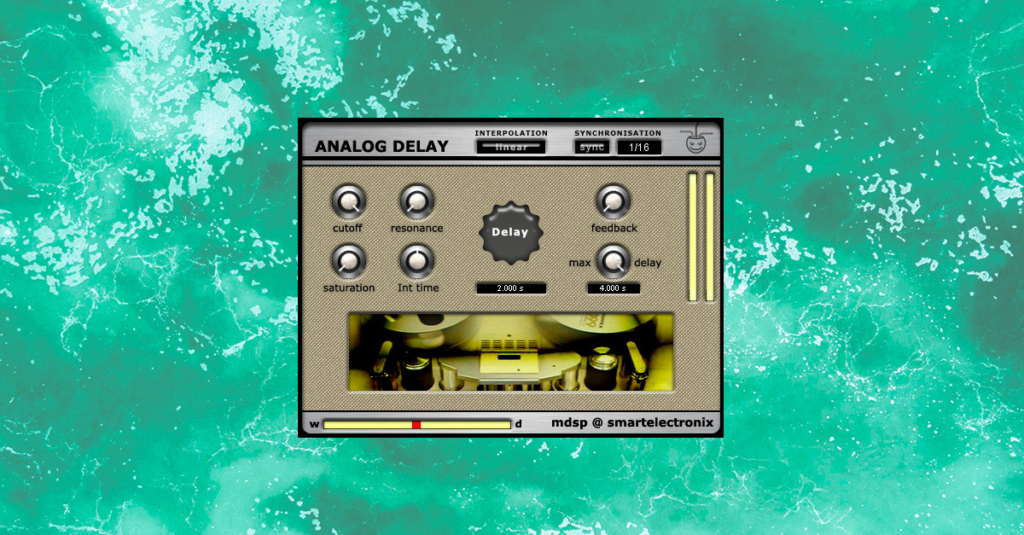 It’s a great way to get started with analog style delay. 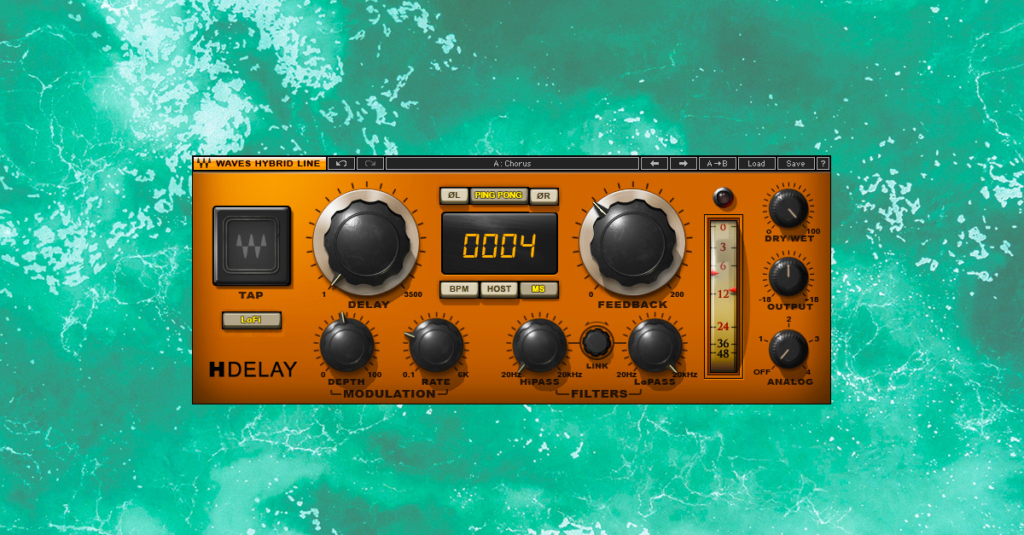 Waves H-Delay is a great workhorse delay that features highly tweakable analog styles great for getting the characteristic murk and feedback of BBD delay. 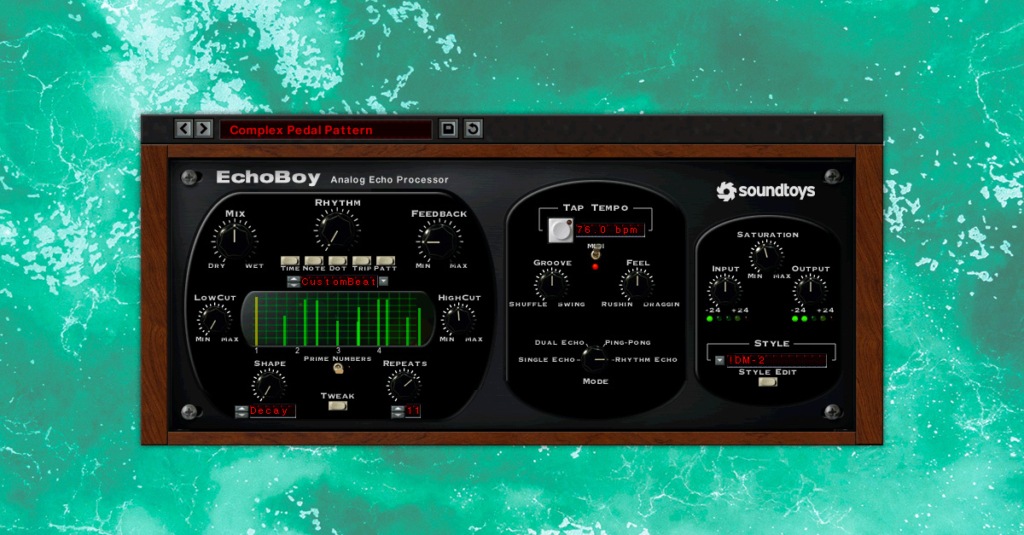 Use analog delay wherever you need a stylish lo-fi delay with lots of character. Analog styles work great for gritty distorted vocals or dirty percussion sounds.

You’ve arrived at digital delay—sounds like the end of the line right?

While modern digital delays are nothing short of pristine, it hasn’t always been this way. The first digital delays had severe limitations due to the high cost of processing power in the early digital era.

Effects designers had to resort to programming tricks to cram everything in, giving early digital delays a distinct character.

The subtle compression and artifacts of the early AD/DA converters used in the first digital delays delivered a character heard often on classic records from the 1980s. 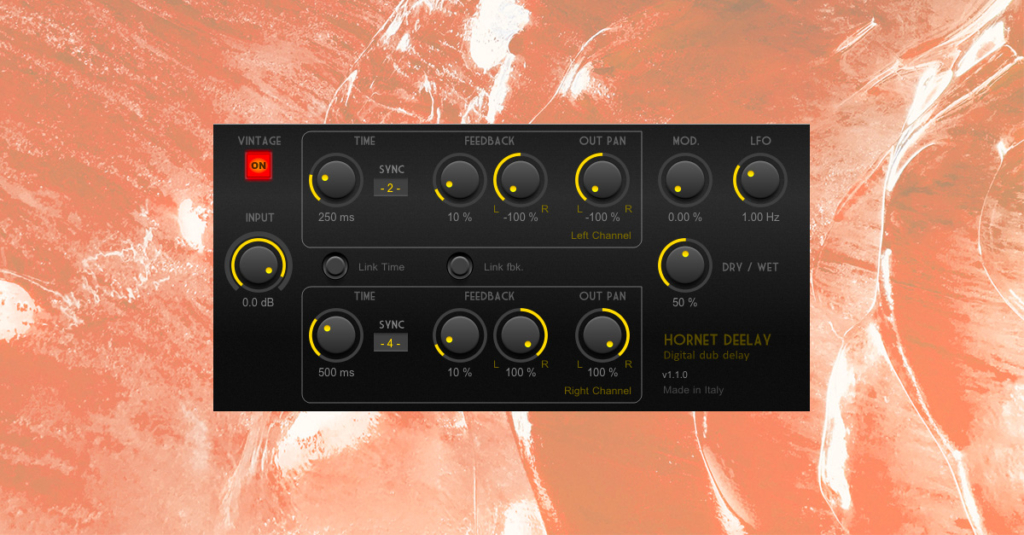 HoRNet Deelay is fully functional delay plugin with a satisfying model of the early digital units. At 4,95 € it’s not quite free, but it’s close enough to make it to our list. 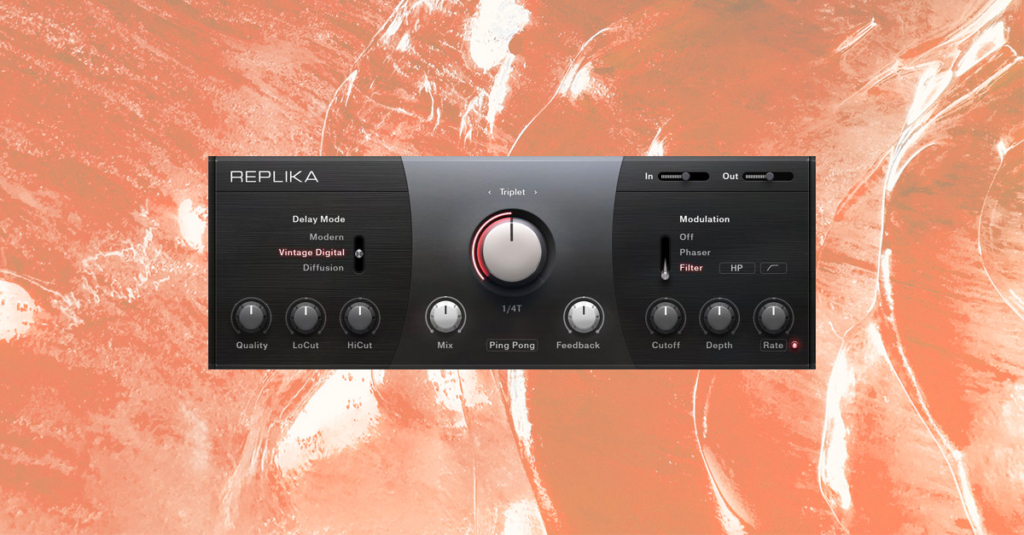 The Native Instruments Replika series is new to the delay plugin scene.

The basic (and most affordable) version of the plugin packs some powerful features including a great vintage digital model. 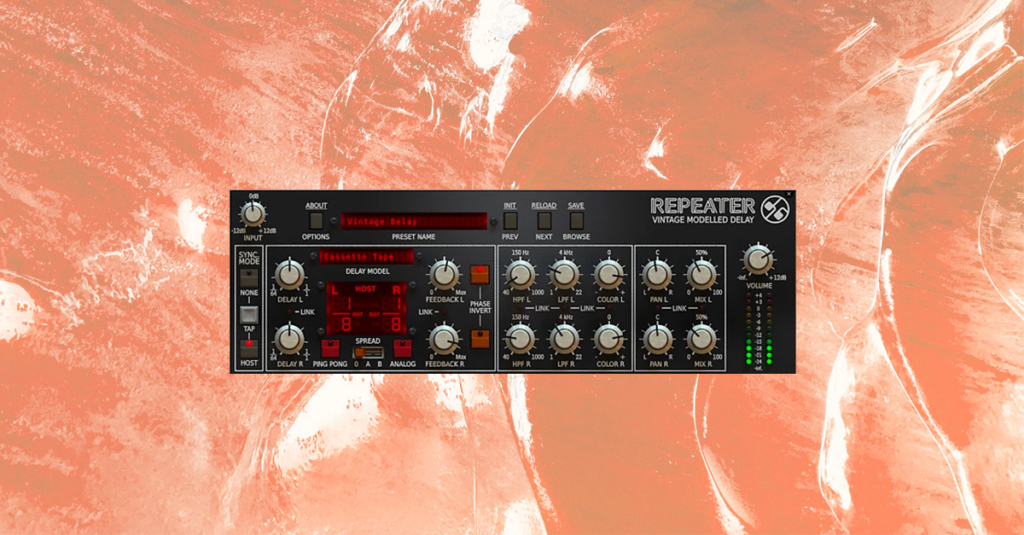 It has two separate stereo delay lines for interesting multi-tap effects and has convincing emulations of early digital designs.

Use digital styles when you want a clear, realistic delay that fits nicely into a mix but still has recognizable character.

The modulation parameters on these types of delays can help you create a depth-enhancing, slightly chorused sound that’ll take you straight back to the best sounds of the 80’s

In today’s DAW era, hardware effects units aren’t the only option anymore. There are a staggering amount of delays that aren’t based on any classic gear at all.

The best thing about pure plugin delays is how powerful and flexible they are. Plugins are capable of creating almost any kind of delay you can imagine—and some that you can’t!

Here’s the best ones… 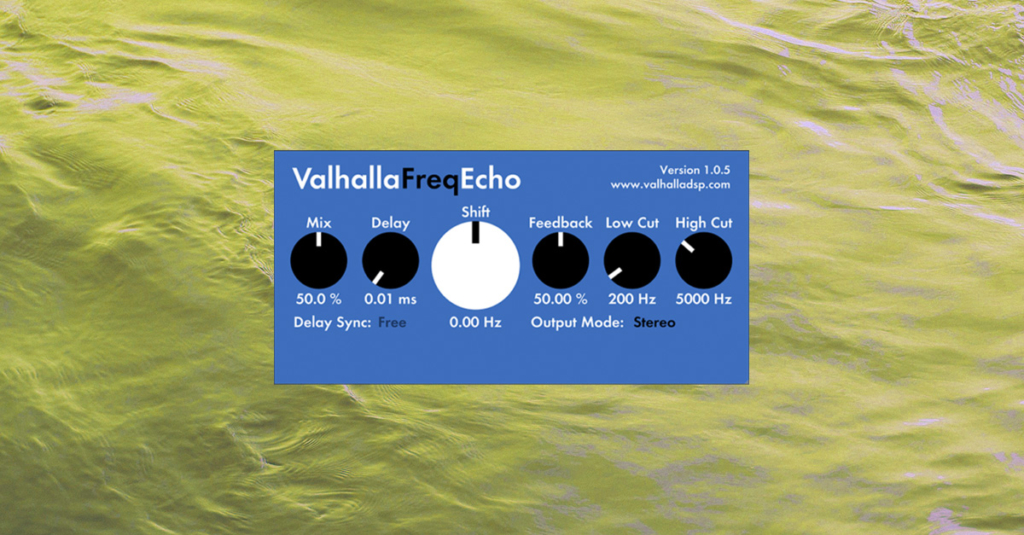 With just high/low cut filters and a pitch-shifter on the repeats, the FreqEcho can conjure a inspiring amount of delay weirdness.

ValhallaDSP UberMod is the full realization of the FreqEcho (see above).

With 32 modulated delay taps and extensive modulation and diffusion options, there’s no shortage of interesting textures you can create with UberMod.

FabFilter—The reigning champs of modern DSP engineering—are back with this sophisticated plugin delay.

The filter and modulation options available in Fabfilter Timeless 2 are incredibly versatile and creative.

The sky’s the limit for how to use plugin delay. Modern delay plugins are outstanding sound design tools. So get creative and come up with something new and exciting.

Delay time is a flat circle

Delay is an incredibly musical effect for creating atmospheres and ambience. It’s an essential mixing tool for every engineer.

Picking the right delay plugin out of sea of options can be a daunting task. But knowing a bit about the kinds of delay that are out there will help you get there faster.

Now that you know a little bit about the different kinds of delay and how to use them, go try out some the different styles on your own tracks.