Circle of Fifths: What It Is and How to Use It in Your Songwriting

If you’re not familiar with music theory, the circle of fifths and key signatures might fill your brain with intense boredom or confusion.

But the truth is, tackling music theory concepts will only make you better at what you do. With tools like the circle of fifths, they don’t have to be complicated either…

Hearing music is one thing, but seeing music through the circle of fifths turns something complicated and messy into something condensed and easy to follow.

In this article, I’ll show you how the circle of fifths diagram works and help you understand how to apply it to your songwriting.

What you’ll need to understand the circle of fifths

To get the most out of this article, you’ll need a solid understanding of what chords are and how they operate in music.

If you need a quick refresher, check out these guides on how to build chords and chord progressions.

Once you’re up to speed, make sure you have a pencil and sheet of paper available. The best way to memorize the circle of fifths is to draw it on your own and take notes. Ready?

What are key signatures?

Key signatures are unique sequences of sharps, flats and natural notes in music. A key signature is all the accidentals found in a key’s scale.

Sharps (#) (not to be confused with hashtags) are symbols that represent notes positioned a semitone or half-step above another note. For example, a C natural can be found on a white key on a piano, a C# is located a semitone above C on the black key:

Flats (b) (not to be confused with cute little b’s) function in the opposite way as sharps. For example, A natural is represented by a white key on the keyboard, so Ab would be the black note directly below it.

Oh, also, flats and sharps can share the same note locations. Confused yet? I am.

No sweat! understanding everything I just said is why we have a nifty little thing called the circle of fifths!

Let’s study the circle, write out some key signatures, and use it to build some chords— Soon everything will start to click.

The circle of fifths [Infographic] 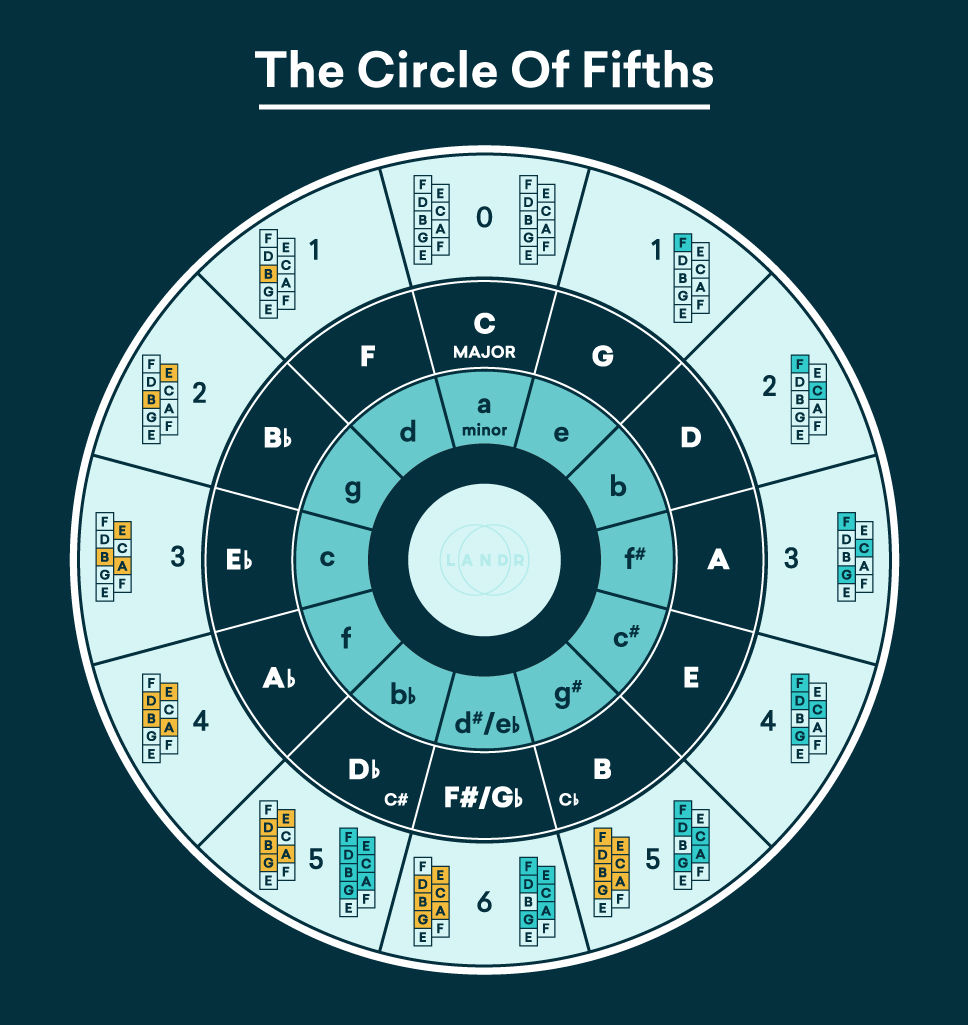 The circle of fifths is a visual representation of the keys you hear in music. Starting at the top with the key of C major. The circle is split between the sharps (right side) and flats (left side) we encounter as we travel around it.

Use middle C on your keyboard to follow along.

Start on the right side

Let’s start with the major keys on the right side of the circle.

It’s called the circle of fifths because each key signature is separated by the distance of a fifth interval (for example: C to G on the circle above represents a fifth).

Now move one space to G, the next key. You’ll notice in the outer ring of the circle that a new sharp (teal box) comes along with it.

The key of C has no sharps, G has one sharp, D has two sharps, and so on around the circle.

Since you know D major has 2 sharps, try writing out the notes in the key of D using the circle to figure out which notes are sharps.

A sharp is added for every new fifth until we reach the bottom of the circle with the key of F#. The key of F# can also be interpreted as Gb.

Moving to the left side

Now let’s tackle the left side of the circle. Instead of starting at the top, we’ll start where you left off at the bottom with Gb.

Moving clockwise, the flats (yellow boxes) move in order of fifths again just like the sharps. But instead of adding a flat every time it does the opposite and removes one with every new key.

For example: The key of Gb has six flats and Db has five, Ab has 4 and so on.

The pattern continues until we get back to the top of the circle with C major, which again has no flats or sharps. Try picking a note on the left side of the diagram and write out all the flats.

Moving with the minors

Now that you have a good grasp of the major keys, the minor ones are a breeze.

Start back at the top of the circle with A minor. The pattern of fifths and the addition of a sharp works the same as major keys.

The key of A minor is what’s known as C major’s relative minor. This means that both major and minor keys share the same exact notes but start in different places.

Pretty neat, right? When you’re ready, try drawing your own version from memory.

Building chords with the circle of fifths

The circle of fifths isn’t just useful for finding the flats and sharps in each key either. It provides a simple way to build basic chords as well.

Let’s build a couple of basic chords using the circle of fifths as our reference.

You already know from our chord building guide that major chords are built on the root note, the major third and the perfect fifth.

Since we’re looking at the circle of fifths, your perfect fifth will be one spot clockwise from your root.

For example: The perfect fifth of C is G, one spot away from C on your diagram. So you already have 2 notes nailed in your C major chord: C and G.

But how do you find that major third?

Simply move diagonally down from your perfect fifth to find your major third—an E.

So your C major chord is C – E – G. The same trick works all the way around the circle for major chords.

Building minor chords is just as simple, but the pattern is a bit different. For this example I’ll build a C minor chord.

Minor chords start with your root and its perfect fifth, so one spot clockwise on the circle—a G. Again, you already have 2 notes nailed in your C minor chord: C

The third note in minor chords is a minor third. To find the minor third on the circle simply draw a line diagonal and down from your perfect fifth. So in the case of C minor, it’s Eb.

Choose a note on the circle and try building your own basic chords using this method. This is just one of many ways to use the circle of fifths for all sorts of quick theory help.

Once you’re comfortable building chords, start using them to form your own chord progressions.

How the circle of fifths can help your songwriting

The circle of fifths adds a powerful new context to the way you create and interpret music.

A major issue every songwriter eventually encounters is writing the same old things over and over again because it’s safe.

The circle of fifths gives you a net to fall back on when you want to take some risks with your songwriting. It’s a great way to find new places to push your music.

Like so many other things in life, seemingly complicated music theory concepts aren’t so intimidating once you take the time to fully understand them. The circle of fifths gives you a way to make it there quicker.