Let me guess: you use MIDI controllers regularly as a music producer. Or maybe ‘MIDI’ makes you think of elevator music, cheesy computer tunes.

Regardless, MIDI completely changed how we make music.

It accelerated the birth of the home studio. It allowed gear makers to collaborate on innovative instruments. It allows you to seamlessly sync your synth to your controller, sampler, DAW, iPad and more.

At this point it’s hard to imagine what making music was like before MIDI.

Here are 5 key moments in the history of a technology you use all the time.

But first, let’s get the basics down:

What is MIDI in music?

MIDI is the language that allows electronic music instruments (synths, drum machines, samplers) and computers to communicate and connect with one another. It transmits information about what notes you play and how you play them. It also allows to sync the tempo of many devices. 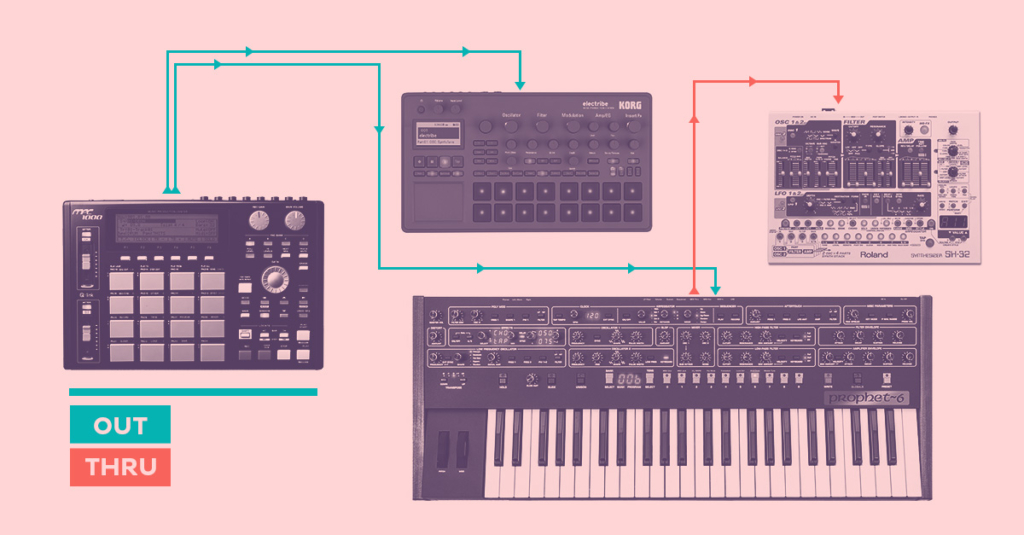 Like any language, MIDI is a standard. It’s become the most widespread protocol for connecting electronic music gear together.

Event messages are instructions that contain information about:

Ok, glad we cleared that up! Now let’s have a look at 5 groundbreaking moments in the history of MIDI:

1.We need a standard!

In the 1970s there was a big issue with electronic music gear.

The problem with CV/Gate connections is that they’re monophonic and not so reliable.

If you wanted your instruments to be fully compatible with each other you had to buy them from the same manufacturer.

Ikutaro Kakehashi then president of Roland thought: enough is enough, we need a standard. 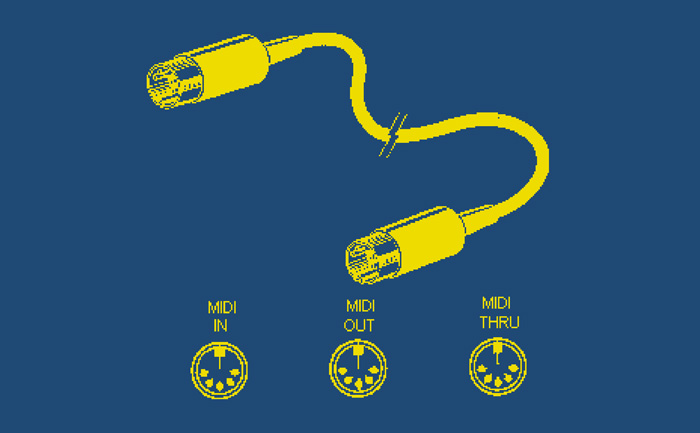 Kakehashi got together with synthmaker Tom Oberheim and Dave Smith – founder of Sequential Circuits, the makers of the Prophet 5. Their discussion about creating a ‘universal digital interface’ laid the foundation of what would become MIDI.

MIDI 1.0 was introduced at the National Association of Music Merchants (or NAMM) winter show of 1982.

The first synth with MIDI was also released at that show: the iconic Sequential Circuits Prophet-600.

Something even more extraordinary happened the following year at NAMM. 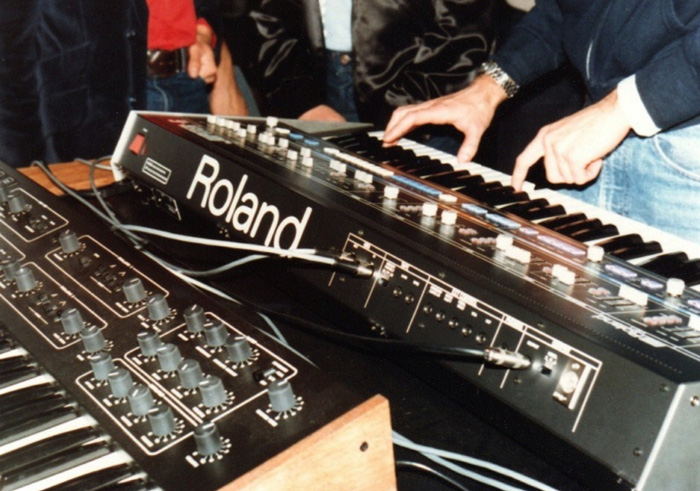 Smith connected a Roland Jupiter 6 with his Prophet 600 through MIDI. This was the first time two instruments were synced through the new standard.

Beyond the development of the actual MIDI technology, Kakehashi and Smith achieved something even more radical.

They made MIDI a free technology that any manufacturer could build into their instruments.

Can you imagine how rich Dave Smith would be today if he’d imposed licensing fees on MIDI?

By making it free and convincing manufacturers across the board to adopt MIDI, it became a real success. This new standard allowed synths to connect and controller one another, even from rival brands.

The MIDI Manufacturers Association (MMA) was founded in 1985 to create the MIDI standard and make sure compatibility was implemented.

That’s like inventing a new language and teaching it to everyone. Pretty cool!

3. The Personal Computer Joins the Party

The timely arrival of MIDI-compatible computer hardware was another revolution.

The first computer with built-in MIDI ports was the Atari ST released in 1985. Other personal computers like the Apple II and Commodore 64 became wildly popular.

The multitrack tape recorder had a new major rival. With the development of MIDI software, musicians started using computers as sequencing and composition tools.

Sounds familiar? Developments like these later led to the creation of today’s DAWs.

4. CV/Gate and MIDI Are Friends Again

Since the MIDI standard was introduced, the use of CV/Gate to connect gear dramatically decreased.

What to do with CV/Gate-only instruments then?

Luckily shortly after the introduction of MIDI in the 1980s, Roland developed the Roland MPU-101, a MIDI to CV/Gate Converter. 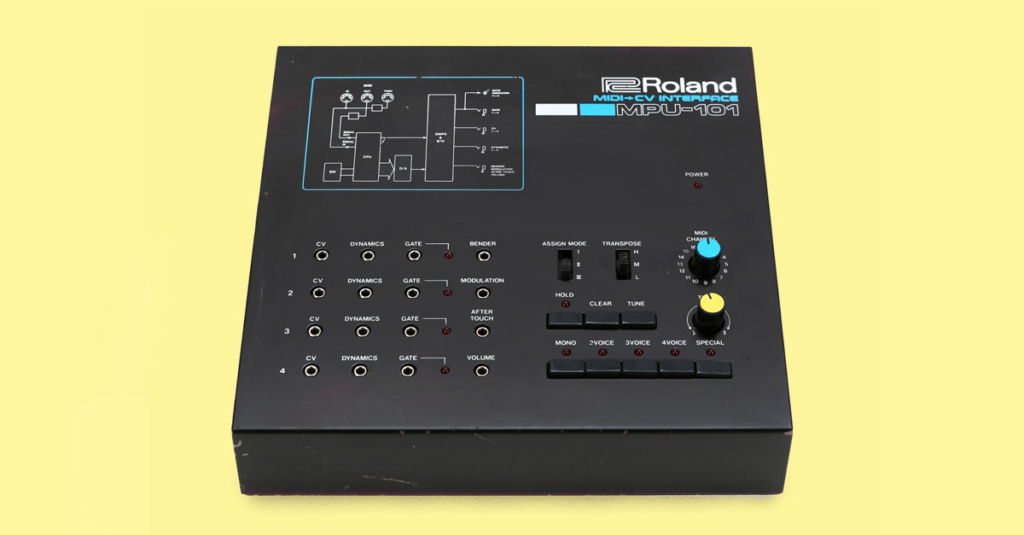 Today with the revival of analog gear and modular synthesis, MIDI to CV converters are making a strong comeback.

If you have a vintage or modular synth you can now use modern MIDI to control it.

An example I like is the Arturia KeyStep MIDI keyboard that came out this year: it combines the latest MIDI technology with CV/Gate outputs.

This goes to show how history comes back when you thought it was long gone.

5. The future of MIDI

It’s pretty crazy to think that we are still using a version of the MIDI 1.0 developed over 30 years ago.

For the 30th birthday of MIDI the MMA even plugged together an old Commodore 64 computer to sequence the Animoog iPad app!

Of course there have been added functionalities. Today MIDI information can also be transmitted through USB cables and iOS adapters.

Despite some complaints (like latency), it’s been working great for most musicians.

What will MIDI 2.0 look like then? Kakehashi the co-inventor of MIDI told Keyboard Mag:

MIDI came at the right time and with the right spirit.

MIDI or the Birth of the Home Studio

MIDI is a unique example of how an entire industry has collaborated (despite brand competition) on a technology that would change the game for everyone.

There were some experiments before MIDI that tried to connect different gear together. What made MIDI successful was its industry-wide adoption.

The coolest thing is also that Smith never asked for licensing fees for MIDI. Instead he encouraged all manufactures to include the technology in their gear.

Dave Smith said it himself: “What MIDI did is it allowed the first home studios to be born.”

If you feel like digging into the nuts and bolts of MIDI nerdiness, check out this Sparkfun article.