Music theory, it’s a powerful tool that any creator should use—whether you’re an experimental composer or a death metal bassist.

By practicing some music theory basics, you’ll be able to bring something new and powerful to your songwriting practice.

Theory isn’t always something you read in a textbook or practice over and over bored out of your mind.

When you look at music theory as a production tool, it can open up new ways to create and spark ideas for your songwriting.

In this article, you’ll learn 7 of the easiest and most beneficial ways to turn music theory into songwriting inspiration.

1. Add vibrant new colors to your chords with chord extensions

Do you already know all the basic chord progressions? Are you getting a bit bored with them?

If you’re tired of the same old major and minor chords, consider adding some 6ths, 7ths and 9ths into the mix.

Think of chord extensions as extra colors and moods for your basic chords. Extensions can give overused progressions extra flavour right where it needs it.

For example: Let’s take C major. I encourage you to follow along on your instrument or piano roll

Adding a new note, like a major or minor 7th for example, will completely transform the sound and feel of the chord:

Even adding one extended chord to a progression can bring an entirely new energy and thoughtfulness to your music.

Major and minor 7th chords are just two examples, but there’s a vast array of other possibilities to consider.

Modes might sound like a stuffy music theory term, but they’re actually just a fancy word for scales.

That good old major scale that your teacher made you play over and over again on the piano is actually a mode.

There’s actually seven music modes in music theory that will each bring their own feel to your songwriting.

The easiest way to understand modes is to look at your keyboard or piano roll.

Each mode is built with no accidentals on 7-note patterns that begin on each white key.

The major scale or Ionian Mode starts on C major while the Lydian Mode begins on F. 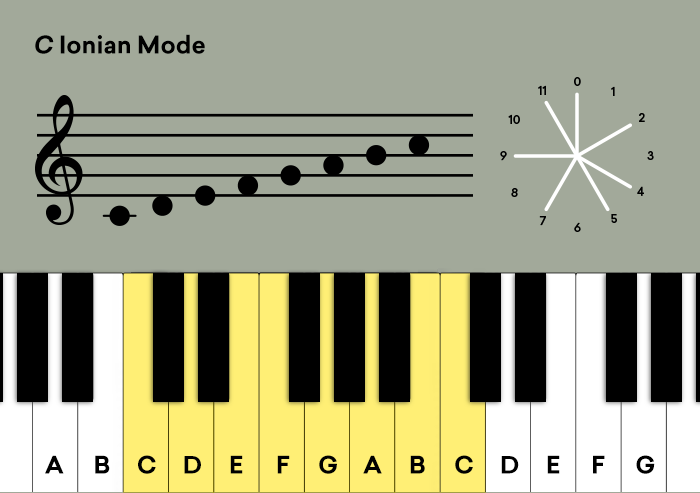 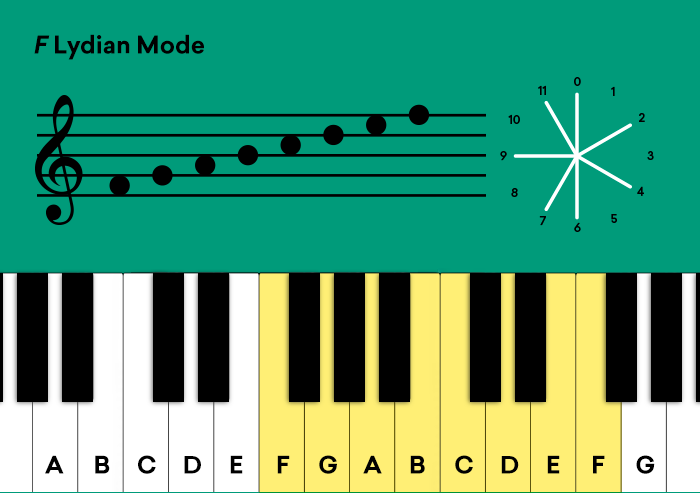 The unique tone and semitone patterns from this position can be adapted to any key in music.

Feeling a bit lost or need a refresher? Use the circle of fifths guide for more info.

Whether you’re an aspiring pop star or a jazz nerd, experimenting with obscure time signatures can unlock a lot of great musical ideas.

If you create radio-friendly music, you’re probably used to writing in conventional time signatures like 4/4 or 3/4.

Those signatures are great, but you might be missing out on tons of other ways to present your music rhythmically.

Brilliant artists like Radiohead are able to take an obscure time signature like this and transform it into a compelling pop song:

“Money” by Pink Floyd is another great example.

Set in 7/4, the phrasing in this song is so seamless that it almost sounds like it’s written in a conventional time signature:

There’s no hard formula for experimenting with obscure time signatures. It’s all up to you.

Spend some time approaching the rhythm behind your songs. It can generate a lot of quick new ideas in your songwriting

Next time you open a new project in your DAW, set your session to a new time signature and see what happens.

4. Forge a tonal path with the Circle of Fifths

If you’ve ever found yourself writing the same chord progressions over and over again, the circle of fifths is a great map for taking your chords new places.

This isn’t a music theory tip as much as it is a massively helpful visual guide. Use the circle of fifths as a starting point for your next wave of song inspiration.

For example: Let’s say you’re writing a song in the key of G Major. The circle of fifths will show you G’s closely related keys, its relative minor and how many accidentals it has. 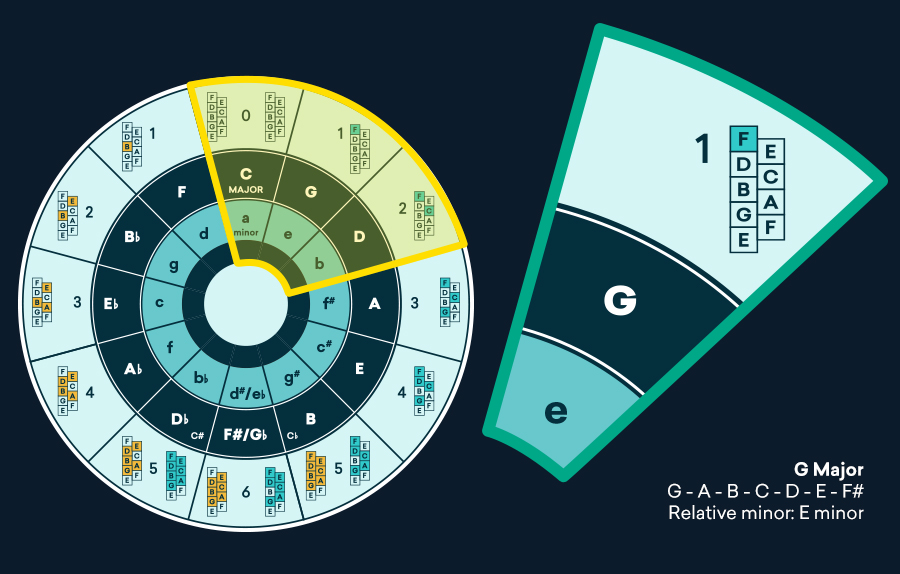 Using the circle of fifths not only shows you where you’re at musically, but also potential places to take your chords next.

Going back to the example of G Major, we can see that modulating to D or C Major works but that moving to an unrelated key like Db doesn’t make sense.

This is especially helpful if you’re new to music and are trying to find your footing, or if you’ve developed some boring habits in your songwriting over time.

If you’ve been making music for a while, you’re probably well-versed when it comes to major and minor chords.

But if you never branch out of these basic chords, you’re limiting the potential of your songwriting.

A well-placed diminished or augmented chord could mean the difference between a chord progression that’s meh or wow.

“God Only Knows” by The Beach Boys, is a brilliant example of diminished chords used in popular music.

Here’s the tone-semitone pattern of a diminished chord compared to that of an augmented chord:

If you’ve ever heard the creepy, otherworldly soundtracks of 50’s Sci-Fi movies, then you’ve definitely heard augmented chords in action.

Diminished chords pull in a certain tonal direction, while augmented chords tend to sound aimless and obscure—which can add a nice mood to tired progressions that might be boring or uninspiring.

To add even more character to these chords from the first tip on this list.

Diminished and augmented chords don’t show up in popular music that often, which is exactly why you should be using them!

Say no to boring chords!

Suspensions and anticipations are easy ways to add some tension and drama into your music and encourage some new and inspiring ideas into your process.

Anticipations are non-chord tones that eventually resolve into a chord.

Suspensions are tones left over from previous chords.

Listen to the last two chords in the verse chord progression of Radiohead’s “Exit Music (from a film).” The the 4th (D) in the Asus4 chord resolves down to the 3rd (C#) of the A chord, a classic 4-3 suspension.

7. See the bigger picture behind your music with Roman Numerals

Roman numeral analysis lets you see how the chords you’re playing interact with one another in a powerful way.

Why is this important?

Well, adding symbols to your chords gives you a better understanding of the relationship between chords in certain keys.

Let’s take a look at all the chords in the key of G Major for example: 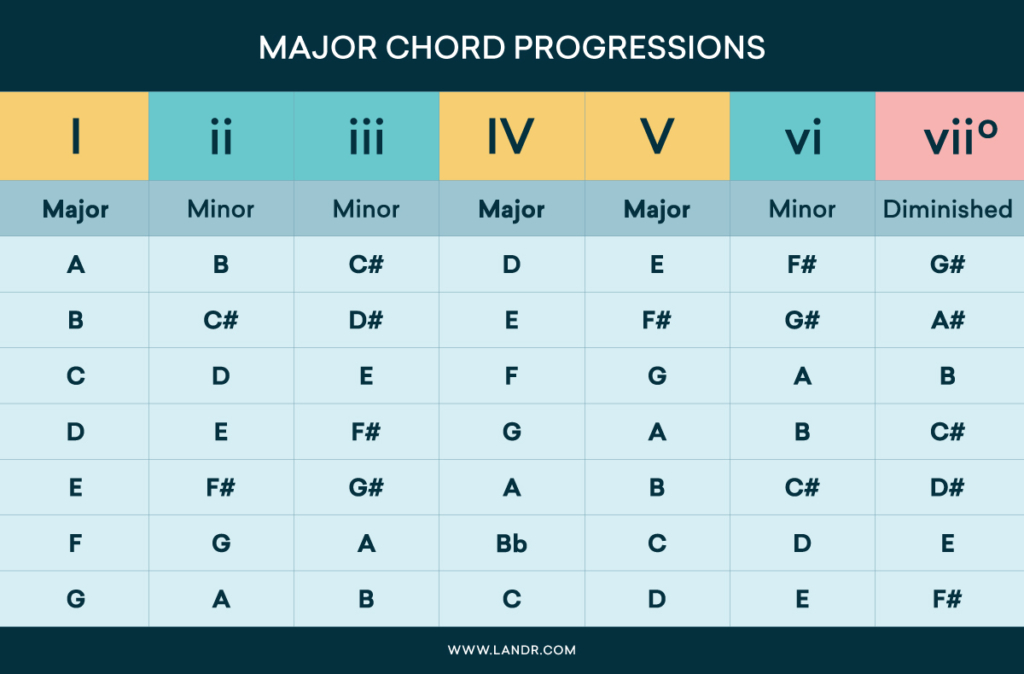