Reboot And The Endless Pursuit Of Play

When you’re a travelling DJ, musician and producer, the meaning of the word play is hard to pin down.

It could mean playing a Miami yacht cruise on the Biscayne Lady, or playing a live hardware set at Pacha Mallorca, or maybe it means playing in the studio to find some new accurate mixing techniques.

Perhaps no one has worked harder at understanding play than Reboot—the production alias of DJ and producer Frank Heinrich.

His constant playing has resulted in hundreds of seminal records, gigs that dot the entire globe and musical experiences that have lifted many dancefloors off the ground.

Heinrich’s influence as a DJ and producer has grown to the same level as some of the legendary clubs he frequented as a youth in his hometown of Frankfurt—Club experiences that would eventually lead Heinrich to producing his own records as Reboot.

He set aside some time from his rigorous schedule – one that includes live hardware sets, DJ gigs and studio time – to shed some light on his process, philosophies, productions and how Reboot plays.

Growing up in Frankfurt how were you first introduced to club music and how did you eventually start producing your own sounds?

My first contact with proper club music was through a radio show called Clubnight in the late 80’s early 90’s. Every Saturday evening DJ’s like Sven Väth, Marc Spoon or the Wildpitch Crew hosted this 3 hour continuous mix of electronic music. I was hooked straight away.

In 1990 I had the chance to see Sven Väth at the legendary OMEN in Frankfurt. Thinking about the energy in that small room still gives me goosebumps… So I started buying records and dreamed about becoming a DJ.

A friend of mine introduced me to the world of producing my own beats, so I annexed my mums PC and started to dig into early programming tools like Fasttracker 2.

From that time on I never stopped making electronic music, first as a hobby and later on – thankfully – as a profession.

What’s something your studio can’t function without?

I’m sure you mean other than electricity right! But to be honest most of the equipment is replaceable.

Although there are two pieces that have been substantial for building my personal Reboot sound more than any other instruments: the Elektron Machinedrum and the Virus TI. I love how they sound and there’s not many of my productions where I didn’t use at least one of them. 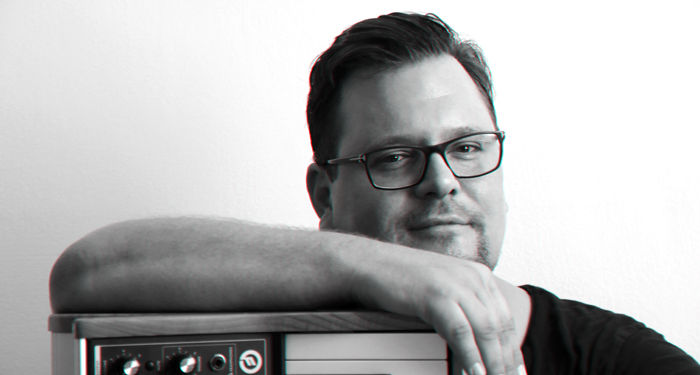 With so many sounds available in your studio, how do you decide when a track is done?

The same goes for the arrangement. I don’t have that much trouble finishing a song because I don’t think the music I make has to be absolutely perfect in every aspect. If it works – it works.

After finishing an arrangement, I normally don’t start working on it all over again. I play the rough song in the car, at the club, in headphones etc. Then maybe adjust some sounds or make little changes in the arrangement, but that’s it.

My songs are snapshots of moods and feelings captured by the sounds and the arrangement that was recorded when I had them. If there isn’t any big mistakes in the mix or the dramaturgy, I try not to mess with them too much.

How much of your process is in-the-box and how much is hardware based?

When it comes to sound engineering I would say that around 80-90% is hardware based. I use Ableton mostly for recording and arrangement and to send MIDI information. My mixdowns are done in-the-box using the Universal Audio Plugins for eq-ing, compression, stereo widening, etc.

I barely use software synths in the studio (sometimes when I am traveling), but that’s more personal taste than an ideology. Sample based sounds like vocals, some percussion or field recordings are often processed via the Elektron Octatrack or the Korg ESX to twist them around and add effects.

I usually directly record the clips of each external instrument. After recording the hardware I play around with the recorded clips, stretch, transpose or cut them. To get to the final arrangement I record jam sessions and add automation using different MIDI controllers like Livid or Akai.

How do you make sure that your limited studio time is productive when you’re travelling so much?

I try not to think about that aspect too much. But generally I’ve noticed that a little bit of pressure, like deadlines, are helpful in terms of efficiency – even if they don’t help the creativity. If I go to the studio thinking that the session has to be productive, I don’t get the best results.

I make music because it is what I love to do and I enjoy spending my time with it. If a day at the studio results in a new track, that’s fantastic – if not, then it wasn’t meant to be and I will give it another try the next day. I always try to at least record something, even if it is just some loops. That usually satisfies the need to be productive.

You share a lot of your process on social media. Why do you think it’s important to share your creation phase as well as finished tracks?

Pretty simple – I find it entertaining to watch other peoples “Let’s Play’s.“ I’m happy if others feel the same about mine.

I’m not really good at posting selfies, or funny animal clips, or all those other shenanigans. I make music. So if there’s something I want to share with my community, it’s usually related to that.

Creative exchange seems like a big part of your catalogue, including a ton of remixes and studio collaborations. What are some of your recent collaborations and how does working with other producers inform your own process?

Collaboration is absolutely a big part of how I work. It’s great fun to hang out at the studio with your buddies and jam around. It also has the amazing side effect of always learning something new about making music. Seeing different approaches, sharing knowledge and broadening my mind is extremely important for me. Working with other producers helps me develop my production skills and keeps me open minded for new ways to create—Music wise as well as technological.

Right now I am working on some new music with my good friends Markus Fix and Christian Burkhardt. Both of them are extremely fit with their gear and besides the fun we share a lot of ideas about process.

Another project is related to co-lecturing seminars about electronic music production at a major institute in Frankfurt, but this it’s still at the early stage of development…

Could you talk about what your live setup looks like and how you landed on that particular setup?

After experimenting with my setup for quite some time, I finally found one that leaves me enough freedom during the performance to be creative and intuitive instead of just running a totally predesigned track listing.

I decide if I take all the components, or just a few of them, based on the size of club or stage. 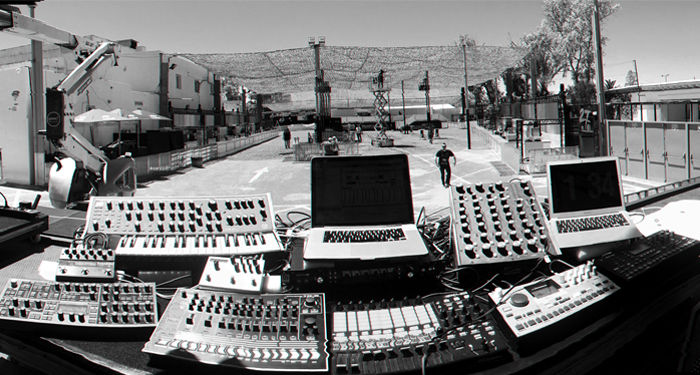 The hardware goes into a Macbook Pro with Ableton Live via the Universal Audio Apollo 8. Inside Ableton I use a subgroup routing, that is sent to a Rane MP2015 Mixer to separate kicks, bass, synths and percussion. It lets me make spontaneous adjustments in the mix and EQing. The Rane goes into the main sound system. I also bring a second laptop for backup. Working in a hot and humid environment can easily knock down the best setup.

The experiences that you make during a DJ set – for example how a track affects the reactions of the crowd or which song works and which song doesn’t – absolutely affects some aspects of my production process. When you make tracks that are dedicated to the dancefloor, having the DJ’s point of view is helpful.

But sometimes it can be a hurdle as well. From time to time I catch myself trying to please the crowd even during the production process which causes me to work against my intuition. For example, sometimes a track can be a complete dancefloor nightmare but it sounds dope at the studio. What direction I follow (the DJ or the producer’s position) usually depends on my current mood. I am trying my best to find the right balance.

Do you produce while you are travelling as well? If so, what is a typical session like for you while you’re on the road?

My track “Caminando” was produced on my laptop at a hotel room in Sao Paulo using older recordings I made at the studio. I’m always carrying my laptop when I am traveling, so I can work on sketches wherever I am. I have my studio projects and sample libraries that I put together on an external hard drive along with some software synths that I like (Native Instruments Komplete for example).

Whenever I feel like it, I start an Ableton project and jam or twist a kick drum for several hours. Every now and then I take those sketches to the studio and see if I can work around them. But sometimes I finish a song on the laptop and play it out at the same night. 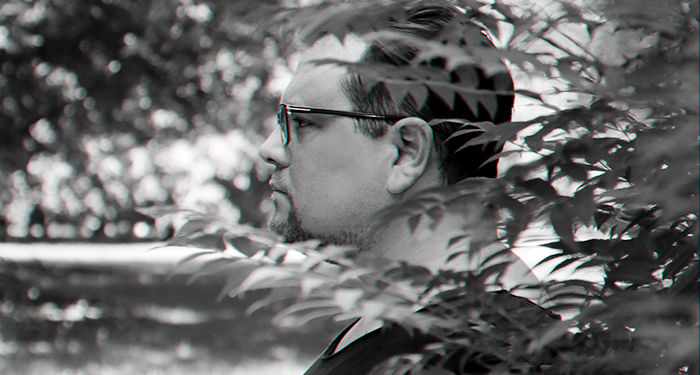 Your releases vary in format—Full length albums, EPs, singles and bootlegs. Do you approach each type of release differently?

When I’m working on an album the idea is to draw a bigger picture by putting it into a concept. Usually (but not always) there’s tracks that I have already produced that show the direction that I want the album to go. The final concept for my last album aLIVE was created together with the people that worked on it with me. After the concept was clear, I produced the main parts of the album following that picture.

So while an album is more related to a concept, my other output doesn’t have to follow a specific lead. The approach is always different. I’m also trying to produce in different directions too. Some tracks are more club like and others rather subtle. The diversity is important because you also need spaces for the music that doesn’t really fit into a certain concept.

On the other hand, the remixes are mostly just for fun. Giving my own interpretation to another artist’s work is something that has always fascinated me.

Since you started producing, what’s the biggest change you’ve seen in music technology?

There has been so many, but in my opinion the biggest ones are related to computers. First of all, the process of making music has become so much easier and affordable. Basically everyone that’s interested and has the chance to get a computer can learn how to create a complete song.

There is no essential need for a big hardware setup, mixing console, a million recording possibilities, etc. It’s opened up a whole microcosm of production that gives everyone the possibility to finish their own songs.

The second milestone is the possibility to share this music with the whole world with just a couple of clicks. I am not going to judge whether this is always good or not, but I am sure that this has changed the way we access music.

What is your prediction for the future of music production?

Who knows what’s coming next? I just read a fascinating article about audio algorithms that use artificial intelligence that determine the “hit potential” of any audio file you create. They compare a song’s features to past hits across multiple genres.

So specific software is allowing artists to adjust their new music to appeal to the widest possible audience. Something like that, along with intelligent audio production tools, and everyone would be able to produce hits non-stop. I am not sure if that is something desirable or just scary, but we will see.